I have recently been thinking a lot about a passage from Samuel Fleischacker’s excellent short work, The Good and the Good Book, which develops an argument for taking traditional texts to be good guides for living. In the first chapter he discusses a story of a wise man who tells a miser where he can find treasure. In going to that place, the miser finds people living in squalor, is moved to dedicate his money to improving their lives. This experience transforms him, and he realizes that the transformation was the promised “treasure.” He later returns the wise man, protesting about the misleading advice, and the wise man points out he originally would not have been motivated by the idea of such a “treasure.” Analyzing this story, Fleischaker notes:

And finally, following an authority makes best sense if one is carrying out an extended course of action and can periodically reinterpret what the authority says as one goes along. If the point is precisely to transform oneself, radically to change one’s character or orientation in life, then that is likely to take a while, and to lead one to have a new, deeper understanding of what one’s authority says after the change than one did before. This last point is the reason why authorities may employ obscure or indirect ways of saying things: what they want to convey cannot be properly understood by their listeners until those listeners have been transformed. And in the course of transformation, the authority’s utterances may well shift from a literal to a metaphorical register, or acquire new literal meanings that we did not expect them to have when we first heard them.[1]

Any statement or text that tries to change a person, moving them from personality A to personality B, risks the possibility that only one of the two personalities will be able to comprehend it, not both. Alternatively, it has to be capable of meaning two different things to each personality.

This is basically the problem Maimonides is struggling with throughout the Guide for the Perplexed. The Torah and its laws are meant to improve the people, as individuals and as a society (I:2, III:28). That means that it has to make sense to them both before and after it has improved them. This is all the more urgent a problem as the Torah is meant to improve the people’s cognitive understanding and beliefs as well (ibid.). The Torah has to make sense to people who think God wants sacrifices, but also to people who know that God doesn’t want sacrifices, or possibly even prayer; instead people should ideally just meditate (III:32). 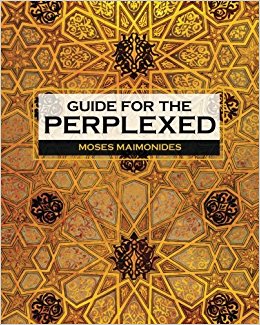 Maimonides solves this on a legal level by allowing the legitimate authorities strong powers both in interpreting the Torah’s laws and in creating legal enactments (Hilkhot Mamrim; intro to MT). On the level of the Torah text and how we interpret it, this is a project that occupies much of the Guide. The words of the Torah, he says, can have more than one meaning (intro to Guide). He therefore must go through and explain to the reader which meaning is the proper one, in all places trying to move away from corporealizing and “primitive” understandings of God.

In a real sense, this problem underlies all interpretation, and gives rise to the need for an Oral Torah. If the Torah is to speak to different people in different historical realities, it must be subject to significant interpretation. What Maimonides work points out is that this problem is internal to the Torah and its goals. If the Israelites had never been exiled, if international politics essentially froze during the First Israelite Commonwealth, the Torah would still eventually require reinterpretation. As society and individuals conformed more to the Torah’s laws, they would become more like the ideal society and individuals. They would then read the Torah and see that it must mean something different than what it had meant to them previously.

Chronicling the demise of parochial cosmopolitanism from a safe distance

The Book of Books

Where Judaism and Literature Meet

Who Knows One? By Moshe Daniel Levine

My take on philosophy, religion, politics, history, and the Jewish community... along with everything in between!

A little philosophy inclineth man's mind to atheism; but depth in philosophy bringeth men's mind about to religion (Francis Bacon)

A Travel Photo Blog for the Nerd in Us All

Blogging about Turkey and Israel, the two most interesting countries in the Middle East

Morethodoxy: Exploring the Breadth, Depth and Passion of Orthodox Judaism
The Orayta Blog

An open forum for Orayta students, alumni, rebbeim, and the general public, to discuss all things Jewish

The Beginning of Jewish Thought

The Book of Doctrines and Opinions:

notes on Jewish theology and spirituality

A Blog on the Hebrew Bible, the Book of Genesis, and the Life of a Biblical Scholar